Alert WATER USE RESTRICTION IN EFFECT Read On...

Why is it important to protect yourself from ticks?

Ticks carry a number of diseases, which they can easily spread to humans and pets when they latch on to feed. These diseases can cause significant short-term illness and they are also associated with long-term complications. As with other diseases, prevention is much easier than treatment.

When are ticks active?

While ticks are most active during warmer month’s (April-September), tick exposure can happen year-round as long as temperatures are above freezing.

Where are ticks found?

Ticker prefer to live in grassy, brushy, wooded areas when they are not attached to a living host. Activities that put you at risk for tick exposure include spending time outside in your yard, gardening, walking your dog, camping, hunting and hiking - among other outdoor activities. Be mindful that pets that go outdoors may carry ticks inside with them when they return home.

What ticks are most common in Massachusetts?

The two most common types of ticks found in Massachusetts are the Black-legged ticks (lxodes scapularis), also called the deer tick and the Dog Tick (Dermacentor variabillis).

While deer ticks are far smaller than dog ticks, size may not be a useful indicator of a tick once it has attached, as ticks become engorged (larger) as they feed. 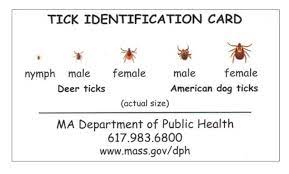 What diseases do ticks in Massachusetts carry?

Lyme disease is both the most prevalent tickborne disease, and perhaps the most well-known to the general public. However, there are many diseases that ticks can carry and it is important to understand how they are spread and the symptoms they can cause. Click on the disease links below to learn more about each specific disease.