Panhandling and the plight of at-risk individuals on our downtown streets and sidewalks has been a source of public concern, debate, and controversy in Northampton for decades. In response to the myriad concerns expressed by city residents, visitors, downtown merchants and property owners, the City of Northampton assembled the Mayor’s Work Group on Panhandling to conduct an in-depth study of the issue. The Work Group was comprised of representatives from multiple social services organizations, clergy, law enforcement, the business community, and city government.

The Work Group's charge was to research and analyze the complex set of issues associated with panhandling and people at-risk in downtown Northampton, to respectfully reach out to people on downtown’s sidewalks to better understand their experience, to survey the opinions of Northampton’s residents and visitors about downtown issues, to study the larger societal issues impacting people on our streets, to study approaches undertaken by other communities faced with complex downtown issues, and to present its research and recommendations to the community for further consideration.

The Mayor made clear from the outset that the Work Group would not pursue regulatory or punitive recommendations. Panhandling, begging, and other forms of solicitations for money on public sidewalks are protected speech under the First Amendment and efforts to ban or regulate them by ordinance have been consistently struck down as unconstitutional by courts.

The term “panhandling” has come to be shorthand for a range of activities and behaviors, some of them negative, associated with a diverse group of people who find themselves at various times on the streets and sidewalks of our downtown. The Work Group took on this complex assignment with the full understanding that to study “panhandling” is to delve into an issue that has polarized public opinion for years in Northampton.

As a group representing a diversity of perspectives and positions that define downtown Northampton, the members worked to set aside preconceptions and stereotypes and to approach the reality of downtown Northampton today with open-minded curiosity and compassion. The Work Group is hopeful that readers of this study report will consider its research and recommendations with that same open-mindedness.

A copy of the Work Group's report can be found here or by clicking on the photo below. 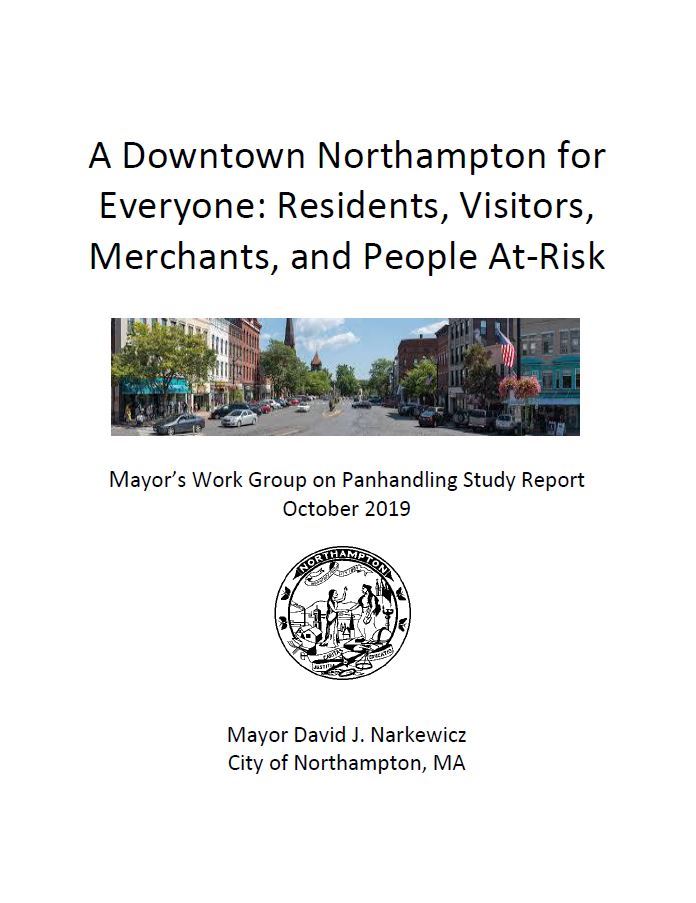