Organizational and Management Assessment of the Department of Public Works (DPW)

In March of 2015, the City of Northampton hired Matrix Consulting Group to conduct an Organizational and Management Assessment of the Department of Public Works (DPW). After months of staff interviews, research, evaluation of current structures and practices, and review of best practices, Matrix issued its final report in January 2016. A copy of the report is linked below: 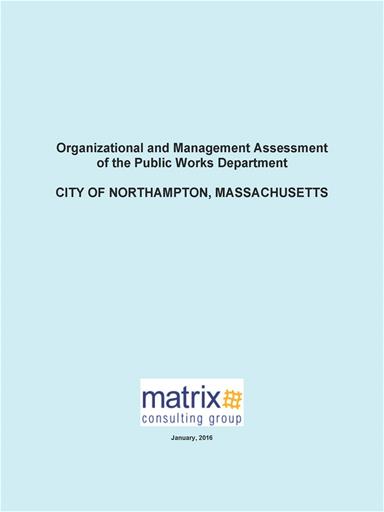 In November 2013, the Mayor and the Board of Trustees of Smith Vocational and Agricultural High School wrote to the Department of Elementary and Secondary Education (DESE) requesting that it commission a study of the organizational and financial structure of the school. (View Letter [PDF])

On May 15, 2015, Massachusetts Education Commissioner Mitchell Chester distributed a notice of the report's release to all K-12 districts in his weekly update:

Districts in Western Massachusetts may be interested in a report ESE commissioned from the University of Massachusetts Donahue Institute about the structure of Smith Vocational and Agricultural High School and options for the future. Smith is operated as a municipal district, not a regional vocational district, although close to 80 percent of its students come from districts other than Northampton. Additionally, many districts in Western Massachusetts are not affiliated with a regional vocational school.

View a Copy of the Study (PDF). 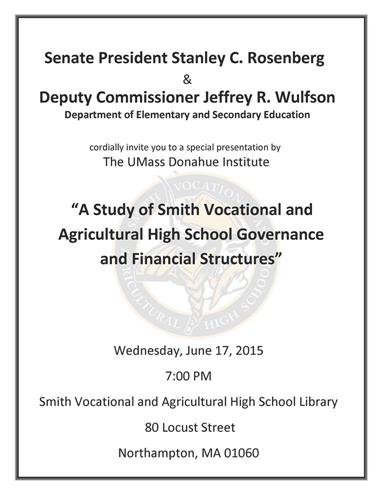 In the fall of 2014, the City of Northampton commissioned Walker Parking Consultants to perform a downtown parking management study. After months of research, staff interviews, field data collection, and input from residents and other parking users, Walker Parking issued its final report on April 24, 2015. Carolyn H. Krasnow, Ph.D, Vice President of Walker Parking, will present the findings of the study at a public forum scheduled for Monday, April 27, 2015 from 7pm to 9pm at the Northampton Senior Center. A copy of the report is linked below:

With capital funding approved by City Council and a unanimous recommendation from the Web & IT Advisory Committee, the Mayor contracted with the Edward J. Collins, Jr. Center for Public Management at the University of Massachusetts Boston in March 2014 to perform a comprehensive information technology assessment. The 9-month study was completed in December 2014 providing the City with a detailed set of findings and recommendations to help guide future decision-making and investments in municipal IT.

View a copy of the completed IT assessment (PDF).

The City of Northampton has recognized the importance of encouraging the development of a reliable, affordable, and secure broadband infrastructure to serve the municipality and students of Northampton; as well as an economic development tool to foster economic growth. On July 2016 the City contracted Percipio Industries, LLC to to examine the opportunity to leverage the municipality’s existing fiber optic network and other infrastructure to bring secure, reliable, affordable, and secure high-speed broadband to the City.

The City’s has an existing investment in a municipally-owned fiber optic network that connects all the public schools, libraries, and municipal buildings in Northampton – a total of twenty-six buildings. Each of the twenty-six buildings that are served over the municipal network have a router installed that enables connectivity on the network. If the City were to expand the network by connecting additional buildings, or through access technologies such as WiFi, the benefit to the community may increase significantly. The intent of this study is largely to address the benefits of enabling more services on the current municipal infrastructure to the locations that are already connected to the network.

Like electricity, water, and efficient roadways, broadband is a critical utility. In fact, while we are able to go “off the grid” for electricity and water, the broadband “grid”, which includes connectivity with the world wide web, cannot be replaced through off-the-grid solutions. You either have access to broadband, which the FCC has now defined as 25 Mbps downloads and 3 Mbps uploads during the peak hours for 95% of your end users, or you do not. (See the February 4, 2015 release on the 2015 Broadband Progress Report at https://www.fcc.gov/reports-research/reports/broadband-progress-reports/2015-broadband-progress-report). This definition is what the FCC considers to be the minimum acceptable speed for consumers and enterprises to connect to the Internet.