The Pace Car sticker (at right) shows other drivers that you are taking part in a community-based effort to address the problems of traffic speed, safety, and congestion in the City of Northampton. The sticker also serves as a "pledge reminder" to Pace Car drivers each time they get behind the wheel and drive around the City and through other people's neighborhoods.

The Pace Car concept originated in Boise, Idaho and has been replicated in Atlanta, Greensboro, Santa Cruz, Honolulu, Salt Lake City, and other cities and towns across the nation.

The program is inexpensive and based on a simple, yet ingenious approach to traffic calming: cars calming other cars. By setting a safe and livable pace for other drivers and sharing the road with pedestrians and bicycles. Pace Cars, in effect, become mobile traffic calming devices or rolling speed bumps.  To become a Pace Car Driver, select the link below: 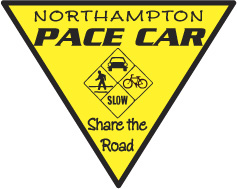